Jesus is the Source of Love and Hope 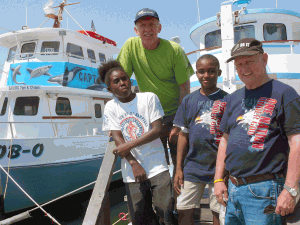 A few weeks ago, we had our annual fishing trip for the mentors and mentees as well as their families.  While riding the boat out to where we were fishing, I took the time to talk with Mrs. Ramsey, a mother of two children who are matched in the ministry; Nick and Charity.

I turned my discussion with Mrs. Ramsey to the subject of Nick’s mentor, Mike.  At that, Mrs. Ramsey became a bit quiet and expressed her thanks for Mike. He was standing just a few feet away with her son. She expressed that Nick has been a constant source of encouragement and a pillar of consistency, something Nick had never experienced from a man.  She said, “Mike is amazing!  He is always there for Nick!”

The theme wound it’s way around to her daughter Charity*, who has been matched to Margaret* for less than two years, but is doing amazingly well at this point.  Charity was an extremely depressed 17-year-old young lady, who also had few friends.  Margaret, the energizer bunny personified, stepped into Charities life at a trying time and became a picture of the unconditional love of Christ.  This living testimony has helped Charity to realize she has worth.  She is now committed to graduating high school next year whereas previously it had been a struggle just getting her to go to school.  Mrs. Ramsey said, “Margaret is a God send” and thanked me for all that Long Island Youth Mentoring has meant to her family.

One other point I would like to make that Mrs. Ramsey did not allude too is the impact her LIYM Area Director has made upon the entire family.  Mrs. Ramsey is also very depressed and has had many serious health issues as well as financial crises.  Her Area Director has been there to encourage and pray with and for her; to exhort her to keep on keeping on not only for her children’s sake, but because Jesus loves her and died for her too.  It is truly amazing to see what God can do through friendships that point to Jesus as the source of love and hope that has been experienced.†