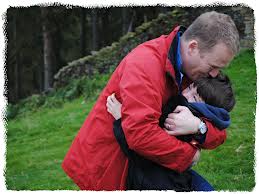 I was about a mile from my house when I saw a boy who looked to be 10 years-old shooting hoops in the street.  I watched from a distance as he retrieved the ball again and again, oblivious to the stranger who was now only one house-length away.  In the next instant a white Toyota pulled into the driveway and the boy, leaving the ball in the street, darts up the driveway and is at the driver’s side door before the car had completely stopped.  His Dad rolled down the window and they engaged in a few words, some of which surely must have been, “Son, would you please move back so I can get out of the car ?”  The son moved back barely enough for his Dad to squeeze himself out at which point the boy flung the door open the rest of the way so he could fall into the embrace of his Father.  They stood like that for a number of seconds, with the boy peering up into his father’s strong, but gentle face, catching up on one another’s day by which time I was at the bottom of the driveway staring at them, but still walking.  If I was not so choked up at that moment I would have acted on the urge to walk up to them and encourage them to treasure the beautiful gift they have.  10 seconds and another half-house length later I heard the ball bouncing again and turned to look.  As best I could see through watery eyes, the son was very happy- Dad’s home and all is right in the world.

Many of us know that feeling- so many do not.  That is one of the reasons LIYM exists; not to replace a child’s dad or mom, but to be a living representation of their Heavenly Father, one they usually are not aware even exists.  This is accomplished by people, called by God, who meet with one troubled or at-risk young person for 2-4 hours per week and walk with them, as life happens.  Many times, it does involve standing in the gap for a father who is absent, but it never means replacing him; that is not a mentor’s role.  A mentor’s role is to be a friend and their goal is to convey the love of Christ through that friendship. That, too, is a wonderful gift.