Whose Voice Do You Hear? 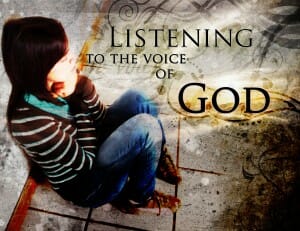 Have you ever done something because you felt that God had told you to do it?  Some Christians are very comfortable saying things like “the Lord told me…” and some Christians would never use that wording.  I know there are lot’s of stories about deranged people who did things because they thought that God, or Satan or the dog next door spoke to them, but to reasonable, mature people the truth should be easy to see.  God has given us clear direction through His word and the living example of His Son so that we can know what He is telling us to do.

It was about a year ago when I met Jeremy, an eight-year-old boy who had been abused at such a young and tender age, not once, but twice. It had affected his behavior and his outlook on the world. He wasn’t even nine yet and he felt all alone in the world. He thought if anything bad could happen it would happen to him. He used lies and his temper to protect himself.

After praying about whom to match Jeremy to I was sure the Lord gave me the answer. *Bill, a quiet, sedate man, is the opposite of Jeremy, who is full of energy, his mouth moving constantly; whether he is talking or eating. On the surface, one might call them the ‘Odd Couple.’ They hit it off right away, going out every week and participating in many of the Long Island Youth Mentoring sponsored activities. After just one month, Jeremy’s mom saw a difference in his behavior. She noticed a calming. He still had his ups and downs but he had greatly improved.

At the end of each year, we take the mentor and child out to dinner to celebrate the completion of the year’s commitment and to discuss how the two have grown as a mentor, mentee and in their match relationship. About halfway through the interview, I asked Jeremy, “What have you learned about God from Bill in this past year?” He looked up at me and quickly said, “I learned that God watches over children … protects them … cause he sent me Bill.”

This “child” had no problem seeing the truth.  He wasn’t encumbered by “maturity” or preconceptions.  Bill had responded to a “tug on his conscience,” saw that it matched
God’s word and Jesus’ life, and followed God’s direction to volunteer to be a mentor.  Jeremy simply observed the facts and reported them, “…cause he (God) sent me Bill.”

Let’s pray that we become like children and become aware that the “tug on our conscience” is often a direction from God to do His will.